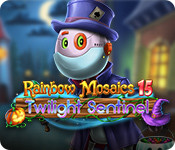 The Robot Helper is back for a frightening new chapter in the Rainbow Mosaics series! When an ambitious scientist invents a gateway capable of splitting the space-time continuum to travel to parallel universes, the world is shocked to find out that a direct gateway to the netherworld has been opened where hordes of evil creatures are waiting to enter our world – and right in the middle of Halloween celebrations! In our restless drive to achieve bigger and better things, humans show a propensity for recklessness and self-destruction. Who can we call on to provide us with the help we need? None other than that terrific Robot Helper!
Game Screenshots - click image to enlarge