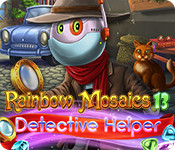 Rainbow Mosaics is back with an incredible new nonogram detective story! This time, Helper the Robot has, very unfortunately, been assigned to an unsavory character and Helper’s own naivety works against him when he gets wrapped up in a shoplifting scheme! Now, everyone is looking for Helper as an accomplice to the crime! Helper is in deep trouble and if he doesn’t help catch the criminal, he’ll be arrested himself! Follow our robot friend in his latest chapter and complete fun nonogram puzzles to see how Helper’s story unfolds!
Game Screenshots - click image to enlarge